Last night was my first full two hour stint after coming back from vacation.  As you can imagine it was a challenge but that was mostly because I was sleep deprived.  I wanted to get back on my diet again in fear that I'll get a bout of gout if I'm not careful.  So that means no booze and cutting down on fatty stuff.

I hate admitting it, but the drinks I do have really help me get to sleep.  With their removal I'm pretty much tossing and turning most of the night.  Not totally asleep and somewhat awake all at the same time.  The last time I did this it took three days to get my sleep cycle corrected.  I assumed that it would come quicker this time since it was only two months ago.  Wrong.

Anyway, it meant that I was dragging myself to class but, as usual, the attention to detail and activity level kept me going.  Class consisted of doing five of each of the last three katas.  15 kata doesn't sounds like a lot but after the first five I was dragging and puffing.  I can tell when I'm tiring out because the kicks start turning into a leg fling instead of a crisp action.

In the after class Mark and I just got started on the ten bunkai.  And then relearning the application series.  This time Mark is doing the other side of the application.  We got about half wayish - around the fifth step.  Being tired makes it a miserable affair trying to remember the smallest things.

Hopefully Wednesday will bring a refreshing brain to the class and I'll feel less overwhelmed and stressed out.

As usual, I lost count of my classes and didn't realize it was the 100th one until just now. I had assumed that I should do something special that would require endurance and such, but instead after some work I got put in charge of Charlotte.  She's seven and actually a good student, but has no response most of the time.  Just a vacant stare.

As I've mentioned I can barely stand working with kids because I don't know how to interact with them.  One of the worst things is getting instruction from Sensei that says practice this or that.  We all know that means that you keep practicing it until he says otherwise, but most of the young kids do it once and want to be done. Repetitive practice just doesn't go into the equation.

My next frustration is that you can't offer "what would you like to do" and expect an answer.  I have to be directive and keep forgetting that little fact.  Despite my griping, Charlotte was able to learn the second half of a kata that I'm struggling through myself.

The class consisted of warmups and then Mark and I were to run through as much as we can as it relates to the exam.  We didn't get very far because we couldn't remember the application to Nifanshi.  After a refresher from Reed we were back on schedule, but never got to through the bunkai for Kyoku Roku Dan.  Sigh.  The only way we are getting to get anywhere is by doing both classes.  I've got to get myself together to get both classes in or we are never going to move forward.
at October 20, 2016 No comments:

A blast of golden sparks played across my vision and cleared as quickly as it appeared, but for those few moments I was completely vulnerable.  As usual I would have loved to see all that in slow motion.  Probably a really cruddy block on my part; letting a hooking punch slip through and bang my chin. 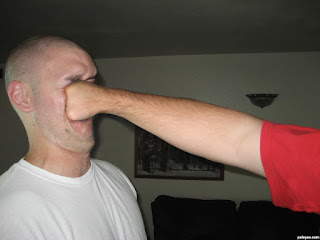 
I've been off for a month and my practice has only been kata.  There hasn't been any exercise except for the occasional long walks on windy Scottish vistas.  Upon my return from my vacation I tried running, but I was only able to eek out a weak 2.5 miles.  So when I finally make it to class it turns out to be fight night.  Reed Sensei is getting ready to go to tournament this weekend and needs to get his head right, so that means we all get to practice a bit.  Thankfully we all had our teeth protection on.  The first time I've put mine in for over five years!?

To prep for fight night we have to warm up fairly well and do a bunch of speed drills coupled with a few tips on strategy.  And they we were ready to go.  Alas I was partnered with Reed right away and my glaring errors came to light.  The worse thing I do is stop fighting when he gets a good hit in.  If whoever is acting as judge doesn't see it then they don't stop action and I could get a good shot in, but I end up there getting tagged a second time because of this bad habit.

Something to work on should I ever go to another tourney.  I'm also very slow.  Or fast with really bad form and technique.  Sigh so much work to get back where I was.

Yesterday I ran almost three miles.  I far cry from my big 5 before I left.  I'm hoping to run five on my birthday (Tuesday).

Holy Cow!  So much time has passed since I've sat down and collected my thoughts for a quick update about my martial practice.  March wa...