I’ve long been a proponent of having new people come to class, but I really love  new folks that come and have a lot of experience.  We live on the outskirts of nowhere, on the edge of the world, but we have a highly transitional population and we occasionally get lucky.  Case in point – last week we had a new young guy who was incredible motivated and appeared very excited to be in class, but never showed up afterwards.

This week we’ve had a new lady show up and she’s also from a TKD school.  She has her black belt and appears to be enjoying our class, but you can see the confusion in her face at times because of the difference in teaching styles.  I hope she stays because she brings in skill as well as having another lady in class.  Our only other one is Swimmer, but she’s in High School and her schedule keeps her away from class frequently. 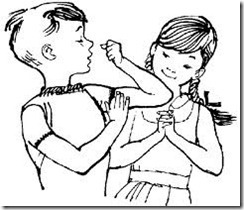 Elbow Strike to Face! (I was looking for an image of Confusion?!)

I’m a bit behind in posting because work has become very busy as of late and when I have a moment to myself I forget that I want keep some memory of what’s happened in class.

Dave was worn to the bone.  He got a tip that there was some free firewood and he filled up his trailer and truck and still decided to come to class the same day.  While he yawned his way through class Teacher asked him about testing.  Dave said that he was ready to go, so Teacher asked if he could do the test that night.  He nodded his head wearily (I might be projecting…) and, boom, the test commenced during the 2nd hour.

Teacher had everyone sit down, which is standard for his type of testing, but had Dave remain standing.  The additional surprise being that he had me remain standing as well.  I presumed that we’d start with sparring, but that was unusual because this was just Dave’s Green belt.  So Teacher had me join him at the head of the mat to help in testing.  To be specific he was actually using Dave’s test to educate me to the process.

During the test he would periodically turn to ask me what was next.  To which he received my blank look.  I think I made it abundantly clear that I cannot remember what was on tests, thus my making everyone fight way before it was required.

Poor Dave had to do a lot of waiting while Teacher and I mumbled together.  I actually apologized a few times because I just didn’t know what Teacher was asking.  Derp!

It’s probably not a reason to get really excited, but after hanging out with kids class, which seems to be sticking to the 23 member level, the adult class can be a bit of a let down.  We had 8 last night which is honestly a good number considered the space we have, but I honestly worry about us losing some of our numbers due to normal attrition.

So I was pleasantly surprised that a new guy showed up last night.  On top of that he’s a young guy with a black belt in TKD!  It’s like a dream to have energy and experience come into the class.

He’s a nice guy and was able to quickly learn whatever we were doing with a minimum of fuss.  Teacher was nice enough to place me with him for basic punching drills.  He was a bit shaky with our variation on it, but you could tell he knew what he was doing.  Later, during the break, he did flashy spinning kicks with Storm.  He’s certainly physically adept.  Every time they do that flashy stuff I become a bit mournful, because I’m older and not really sure I can generate the physically adept synchrony to do any of what they are trying.  I think I’m going to have to force myself to try some of it just to see if I can orient at high speed.

I had to leave early last night due to a friend leaving town.  Since we are on an island a lot of folks take the long ferry ride back to the main land to continue their journeys.  Because the loading process is so cumbersome the time to say good bye can take a few hours.  If someone has some problems with saying goodbye the stretch of time can be anxiety provoking.  Case in point – last night our friend sprinted out the bar a full ten minutes before she had too.  Not good at good byes.

Class on the other hand was a lot of fun, but I was panting.  My glorious return to the gym has not occurred yet so I’m not getting any aerobic work in.  I had a cholesterol test the other day that confirmed my last couple of months of inactivity.  At least I’m under 200, but my ratio is just horrible.  I can’t wait to see Dr. Sausage-Fingers this year.

The big highlight is that we’ve switched to evening hours and the kids class has restarted.  Since I’m still shy of being involved with all those kids I go in a bit late to help out.  This just means wondering the rows of children straightening shoulders and feet while Teacher explains and leads.  When I showed up on Tuesday there was 28 children!  That means that there is literally no room to move.  Teacher was just down to punches and stances and absolutely no kicking.   Crazy.  By Thursday the class had reduced to 22 which mean they could move forward and back three steps.  For the first time in 12 years he’s actually telling folks he doesn’t have room.  They are actually going to have to call in a month to see if there is space.

For years I've only had a few photos from my first few years at class.  I just added a few of the most recent gang I've been working with.  What a cast of characters!
at October 02, 2011 2 comments:

Holy Cow!  So much time has passed since I've sat down and collected my thoughts for a quick update about my martial practice.  March wa...