We haven't done any sparring for a very long time, but Sensei obviously thought it was time to get the new folks up to speed. I'm assuming it's a misnomer in our mixed Korean/Japanese class, but he likes to call slow speed sparring Randori. From what I understand it means different things in other schools and classes.

Needless to say it was pleasant to pick where I'd left off months ago. Except this time I was able to focus on a few techniques I hadn't been able to put into play in the past. I guess I'll have to learn a few more.

Cook is entering the question everything phase. I'm not sure what all the developmental phases of learning MA are, but one of them is definitely the "endless questions." Last night he had to ask about everything - "why, why why?" Tiring stuff after awhile, but it's good that he challenges Sensei to describe things. I tend to go with the flow and forget that I need to know the underpinnings of what we are learning in order to apply things later.
at October 24, 2007 4 comments:

I'm not even sure how to put tonight's thoughts into coherent, linear writing, but things were definitely percolating in my brain after the weekend.

I've mentioned that people have come and gone to our class over time, and because it's a small town you see these folks as you go through your regular living. So excuses of time and changes of schedule can be taken with a grain of salt if the class doesn't suit someone and they need to move on. I also know that Teacher's style might not "jive" with certain folks learning style and they might have to move in time as well.
So during the weekend I ran into Check who hasn't been to class for sometime. I had actually wondered if she moved because the Karate fairy dropped off a water weighted kicking dummy in front of my house several weeks ago. 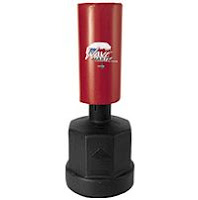 So we chatted and of course class came up. She basically was tired of second guessing Teacher and his methods. To me it sounded like the old quandary, do we blindly listen or do we question to learn more? Check is definitely the latter, while I'll try to straddle both schools. To add insult to injury she said that she ran into Vet and he pretty much couldn't take class because there wasn't any structure. I could sympathize with this because I've often thought that to be like a normal school or have more success in student retention that we'd have skills laid out and have static testing benchmarks. Obviously some folks really want that. I guess we should get rid of belts all together, but it's some tradition built in that keeps the chain of continuity together.
In the end I was kind of wounded for Teacher and myself. I felt like the only reason that I was staying in class was because quitting something is anathema to me. What a horrible reason to stay and what a horrible thing to think.
After a lot of soul-searching I realized that I enjoyed the class for a few simple reasons. It's great exercise and it allows me to develop insights into myself which in turn help me grow as a person. It could have structure, but it doesn't and that's just fine.
So we come to tonight and as I'm walking in I see Check following close behind. She told me during class that after talking about it the weekend she ended up being drawn back to the excitement like a moth to a flame. Hah! She mumbled here and there, but maintained a stalwart composure and didn't complain hardly at all.
at October 16, 2007 No comments:

Email ThisBlogThis!Share to TwitterShare to FacebookShare to Pinterest
Labels: insight

I've been tagged by Frotoe on the 7 Random facts meme.

1. I used to be Marriage and Family Therapist.

4. I swam with Galapagos Penguins. 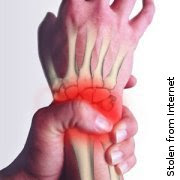 I'm not saying that we practice any "real" kind of Aikido, but we are heavy on the wrist and joint locks and we do love the throws based off those locks, however teaching these things and being Uki for these things is brutal in our class.

I'm definitely going to have to rethink the way I present this to a new person. I've been steadfastly telling new folks that you have to take me to the point of pain so you know how to do the technique properly. A half hour into instruction I'm barely able to move my right wrist without serious discomfort.

Of course the next day I have no problems with articulation or discomfort, but during a few of the locks I kept thinking to myself "man, that's got to be a light sprain." My wrists are never more than slightly sore are so you'd think I'd be better at dealing with the discomfort. And I might be, but pain is pain and wrist pain is something special in its dry intensity.

We started with a few one-two drills and moved on to very slow kicks and distance work. Very tough on the legs, but a great exercise for me as distance is tough for me when we are sparring. I notice that since I've started that I'm growing more comfortable with getting closer, but I'll only do it sparingly. It was on to wrists and then, as if by magic, the night was done.
at October 12, 2007 1 comment:

Email ThisBlogThis!Share to TwitterShare to FacebookShare to Pinterest
Labels: pain based learning, wrist

I'm going to describe tonight in reverse order. As we exited the changing room Teacher asked me, "What has been your learning experience like?" I said at first it was exciting and everything was new and then I hit that plateau and since then it's been puncuated with small peaks and valleys. Everyone echoed this. We found out that Cook is very excited (stage one) and had one of those nights where everything felt wrong even when he was doing it right. We all laughed.

The lesson? When you do this you need to realize that you are only fighting yourself and that you need to relax. Cliche, but I can't describe it any better.

The whole first hour was kata. One through Nine. My legs were shaking and during instruction my mind kept going blank. Terrible feeling. Teacher would have to remind me the first step and then I was good to go. Urgh.

More Elvis hip twist drills that lead to a throw over the thigh. Fun. I was able to one, but not another that required me to take Uki's balance then rock them the other direction when then fight to correct which led to a through. Not so good tonight.
at October 09, 2007 No comments:

Nilon came back this evening and I was proud to say that I didn't have any emotional responses to his appearance. I was more relieved that he showed so that class would have some more people. I was a bit chagrined when we got partnered once or twice. After doing the technique once or twice he becomes restless and wants to try other things. I don't know why that agitates me so, but I know he needs to focus on his basic technique and get that rote repetition in. Personally I want to do the technique over and over again so I get it right. When I was visiting an Aikido school in the big city they had the rule of four. Four times one side and then the other and then switch partners. That way you didn't get stuck with height and distance so much. Ah well, it's good training for me.

With the two girls we totalled six. Which I'm starting to think is the perfect number if we rotate frequently. If the new guy comes then we'll have seven which will be crazy. We haven't had that many people in the class in years.

Teacher is upping the ante again. New moves! He says that these are all things we've learned in the past, but he's putting them together in a new fashion. I'm not so sure about that, but it's still a rush to have so many things tied together. Tonight we had a sequence that went:
Block from the opposite outside, getting in close to trap Uki's striking arm against your body and ram the and hand up into the jaw. Swivel body and Uki goes boom. Then we had to learn the counter. As senior Sempai I had to take a very small circle through from low height. I went boom hard and loud. It's several hours later and no problems!

Items of note: my intent to reduce apologies seems to doing fine. In a drill I elbowed Nilon in the jaw which rewarded me with an audible clack. After making sure he was okay I grimaced and we moved on.

Priest and I trained well together. Both of us are on the same page for figuring out footwork and body placement before Teacher can get to us. Awesome.
at October 04, 2007 7 comments:

In the words of the Rolling Stones - "Shadooby, shattered, shattered." Before class started we had a visitor share with us his desire to join but had to wait until a MRI cleared him for beatings. This brought up the inevitable conversation about what pains we all had; to be shared like a potluck to a pain picnic. In turn, Cook shared with the details of his intriguing back problem. As a youth he was driven over by a car - twice! No wonder he is the crooked man.

Ironically while we were all sharing, none of the catalog of injuries had anything to do with class. I totally forgot about my ankle. However we all said that we felt great after class. Teacher went on at length about how the work we do actually helps spinal health. I'm not totally convinced as I can still experience lower back issues now and then, but those are usually due to poor falls.
I believe I've mentioned that for the last month Teacher has been ratcheting up the complexity of the moves we've been working on. I think that now that we have a few more willing bodies the class has presented him with the opportunity to work on stuff that's been simmering in his brain for a long time. Unfortunately, I chose Tuesday class to tell a junior student how I thought these were the most complex we've ever done. Not really appropriate for the a new guy to hear from a Sempai.

The moves we learned included the most complex hand capture we've ever done. The capture of the punching hand required me to be in a Benny Hill salute then swiveling the wrist lock to take the person down. This includes huge variety of other parts too numerous to mention to be completed at the same time. Do I tell Teacher that if I can't do them then the rest of the class will certainly have a some problems? Probably not because he always introduces us to stuff that we might not be able to do now, but in time do just fine. It's just that this is a boggler.
Final notes:
Not feeling great at moves - rusty at take down stuff/sweeps - not feeling like the advanced student. Can teach somewhat, but not all the way.

When I started at the Shudokan school five years ago, MaryAnn Sensei was working on her San Dan and as part of that she would teach me the k...